Vancouver, British Columbia–(Newsfile Corp. – November 3, 2021) – Altamira Gold Corp. (TSXV: ALTA) (FSE: T6UP) (OTC Pink: EQTRF), (“Altamira” or the “Company“) is pleased to provide an update regarding drilling at the central part of the Mutum target area in the Apiacas Project area, which historically produced an estimated 1 million ounces of placer gold. The project is located within the Alta Floresta Gold Belt in Northern Mato Grosso, Brazil.

Michael Bennett, President and CEO of Altamira Gold commented “The initial diamond drill holes at Mutum have intersected broad zones of disseminated sulphide mineralization and we look forward to receiving the geochemical results. At the same time, the environmental applications that are in process will more than double the available area for drill testing to the west. While diamond drilling continues to test the Mutum target, three new target areas within the Apiacas Project have been mapped and soil sampled and will progress to trenching and drilling in the near future. We are also advancing drill targets at the Santa Helena project.” 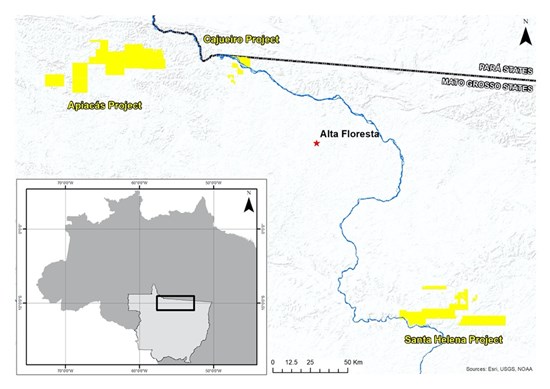 In 2019, geological mapping outlined an area of pervasive disseminated-style gold mineralization over at least 4 km2 at Mutum. A total of 93 surface rock samples of disseminated and altered rocks collected on surface over this area returned gold values of up to 406.6 g/t gold (see news release dated September 11, 2019). Recent exploration has also identified four high-grade vein structures with channel samples returning values up to 3m @ 10.39 g/t gold. Silver assays have also returned high grade values up to 871 g/t silver (see March 8, 2021 news release for more information). An IP survey completed over the area in August shows extensive high chargeability anomalies over an east-west corridor covering some 6 kilometers which is coincident with the historic alluvial and colluvial workings in the target area (see Figure 2). 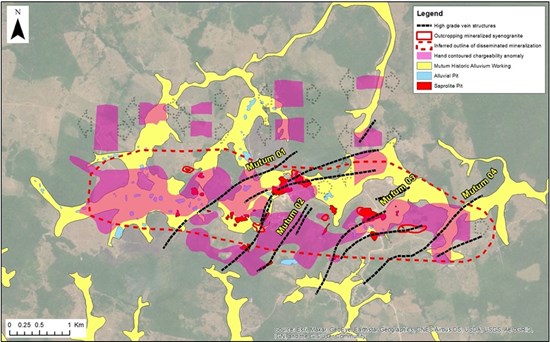 Initial diamond drilling has been limited to the areas with active drill permits covering the central one kilometer east-west corridor within the Mutum target. The first five diamond drill holes were drilled to downhole depths of between 126 m and 276 metres (see Figure 3) and targeted both chargeability anomalies and the depth extension of the surface gold mineralization indicated by both the historic artisanal mining and the channel sample results collected by Altamira (see news releases dated June 4, 2019 and June 8, 2021). Broad zones of hydrothermal alteration, accompanied by disseminated sulphide mineralization were logged within the granitic host rocks intersected. These alteration zones appear to correlate with known clay alteration zones mapped within several of the artisanal placer gold workings. Drill core samples have been submitted to the SGS laboratory in Belo Horizonte and results are pending. 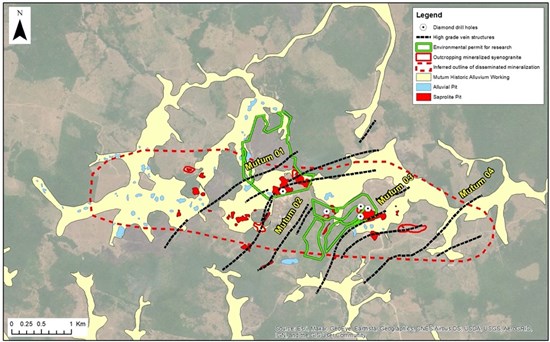 In addition, soil sampling has been ongoing over three new areas both to the west and the east of the Mutum target. A total of 3,724 soil samples have been collected over the three areas to date and samples have been submitted to the SGS laboratory in Belo Horizonte for both gold and multi-element geochemical analyses. Results are expected shortly.

Soil sampling, trenching and geological mapping are also being accelerated at the Santa Helena Project to define drill targets with the objective of commencing drilling during the first quarter of 2022. Targets comprise both discrete quartz vein structures known to host sulphide mineralization with associated gold, which are the objective of historic and current artisanal mining operations plus base metal soil anomalies associated with intrusives.

To view the source version of this press release, please visit https://www.newsfilecorp.com/release/101832