Vancouver, British Columbia–(Newsfile Corp. – August 3, 2021) – Altamira Gold Corp.’s (TSXV: ALTA) (FSE: T6UP) (OTC Pink: EQTRF), (“Altamira” or the “Company“) is pleased to provide an update regarding the upcoming maiden drill program at the Mutum target within the Apiacas project and to provide further information regarding the environmental licensing at the project which is located in northern Mato Grosso, Brazil.

Michael Bennett, President and CEO of Altamira Gold commented “The commencement of the initial drilling program at the Mutum target at Apiacas is truly exciting and is the culmination of several years of effort. During the last few months, Altamira has identified a geophysical chargeability anomaly that is now in excess of 4km in east-west extent and is coincident with an area of historic workings which produced 1Moz of gold as well as widespread quartz-sericite-pyrite alteration and disseminated gold mineralization. The target is simply enormous, and we look forward to the results of the initial drill program.”

The initial phases 1 and 2 of the IP survey have now been completed in the Mutum target area and the geophysical team has been demobilised. The results of phase 2 are being processed over the western extension of the target area. A total of 26 N-S oriented lines were opened and surveyed covering a total length of 53 km (see Figure 1). 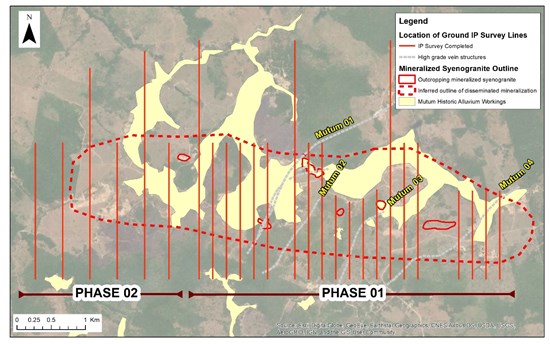 The initial 3,000 metre diamond drill program will investigate the depth continuity of the surface gold mineralization mapped and sampled within the syenogranite intrusive rock between lines 3 and 8 where three separate channel samples collected from the outcropping mineralized intrusive returned values of 2.0 g/t gold over 12 metres, 0.9 g/t gold over 6 metres and 0.41g/t gold over 12 metres in the northern part of lines 3, 4 and 5 and will investigate part of the high chargeability anomaly which lies directly beneath areas of historic alluvial and colluvial workings on the southern extensions of the lines between lines 3 to 8. Drill holes will be targeted to an initial depth of 150 metres and 8 initial holes have been sited within the area which has received recent environmental permission for both trenching and drilling (see Figure 2). Further holes will be sited once geological and assay data is on hand from the initial holes.

Drilling is expected to continue until October and samples will be submitted to the SGS laboratory in Belo Horizonte where the turn around time is expected to be between 4-6 weeks. 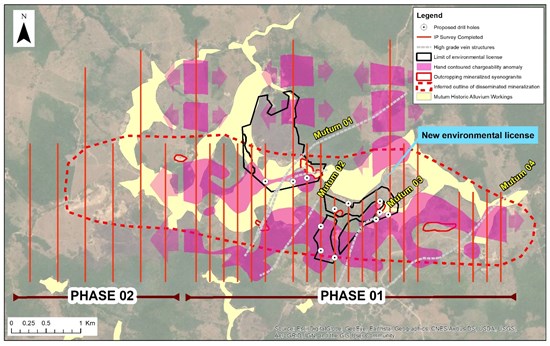 The environmental department of the state of Mato Grosso, SEMA/MT has approved a second environmental permit LOP No 324020/2021 covering part of the central area of the Mutum target which allows Altamira to trench and drill under both the chargeability anomaly and areas with mineralized syenogranite intrusive rock which has been mapped and sampled on surface. The permit covers part of the ANM 846.947/2018 exploration permit and is valid until 06/04/2024. This is a significant milestone as it expands the area within the Mutum target which can now be drill tested in order to prove the potential of the target.

To view the source version of this press release, please visit https://www.newsfilecorp.com/release/91929