The Cajueiro Project comprises a large land package (28,557 ha) and is located in the Alta Floresta Gold Belt, a Proterozoic calc-alkaline volcanic arc which includes medium to high-grade metamorphic crustal segments. Historic placer gold production in the belt is generally recognized to be in the range of 7-10M oz, primarily from garimpeiro activity (informal small scale miners). Historic placer production at Cajueiro is estimated to have been in the order of 250,000oz of gold making it one of the largest historic placer gold camps in the Alta Floresta belt.

Gold mineralization at Cajueiro occurs within microgranites and rhyolites and is hosted by a set of Northeast (NE) and East-West (E-W) trending conjugate shear structures exhibiting late brittle deformation. These were the primary structural controls on hydrothermal alteration and associated gold mineralization.

Gold and pyrite in the bedrock sulphide domain is contained within hydrothermal alteration envelopes within and adjacent to the structures, which may extend for tens of metres from the main mineralized structures. An alteration assemblage of sericite-epidote-chlorite-quartz readily distinguishes the prospective “green” rhyolite and microgranite from their unaltered reddish counterparts.

Gold is also present in the saprolite overlying bedrock, in the oxidized equivalent of the sulphide alteration assemblage. Prospective saprolite hosts an assemblage of sericite-chlorite-silica, with disseminated limonite and “box-works” of limonite with rare occurrences of chalcopyrite. This alteration package is clearly visible on surface in many locations throughout the property.

Since acquiring the property in April 2016, the Company has completed 25 surface trenches totaling 4,063m that has resulted the identification of two new previously unrecognized mineralized zones, one at Baldo East and the other at Toninho, comprising multiple parallel structures similar to known zones at Crente and Baldo.  In addition, the Company has drilled 49 HQ diamond drill holes totaling 3,154m.

The Baldo East target area is located approximately 500m due east of the Baldo resource and constituted an important previously untested gold-in-soil anomaly and a series of high-grade rock samples from surface which range from 3.4 to 118.4 g/t gold.

Subsequent trenching and drilling identified a series of previously unrecognized WNW-trending high-grade structures including Baldo East 1, Baldo East 2, Matrincha 1 and Matrincha 2, which individually extend up to 900m along strike. All of these structures are open along strike and at depth.

Channel samples from these trenches include; The previously untested Maria Bonita gold-in soil anomaly is located 4.5km west of the Cajueiro resource area and contains higher gold values than those from Cajueiro resource area. A total of 76% of the soil samples returned highly anomalous gold values above 100ppb gold up to a maximum of 3.1 g/t gold in soils. The anomaly is currently 800 x 800m in size and is open to both the east and the west, making it the largest gold anomaly at Cajueiro.

Nine initial reconnaissance drill holes were completed in 2022 and results have been returned on four of those holes to date. All four holes cut significant mineralized intervals* from surface as follows;

*Gold analysis has been conducted by SGS method FAA505 (fire assay of 50g charge), with higher grade samples checked by FAA525. Analytical quality is monitored by certified references and blanks. Until dispatch, samples are stored under the supervision the Company’s exploration office. The samples are couriered to the assay laboratory using a commercial contractor. Pulps are returned to the Company and archived. Drill holes results are quoted as down-hole length weighted intersections On October 10th 2019, the Company announced that it had received results of a revised resource estimate from Global Resource Engineering Ltd. of Denver for the Cajueiro gold project. The key points are as follows:-

The detailed breakdown of resources by class, rock type and domain is shown below:

A capping analysis of the assays was performed, resulting in 5 domains being capped to values between 5 and 10 g/t gold.  Capped assay intervals were then composited to 3 meters with subsequent variography completed for each mineralization domain to determine the primary directions of mineralization and extent of grade continuity.

Constrained gold resources were determined using mining shapes based on a $1,500/oz gold price. Resources falling within the pits were reported above cut-off grades of 0.25 g/t Au. Recoveries were assumed to be 92% based on the metallurgical testwork completed to date. Mining costs used were US$2.00/t for fresh rock, and US$1.50/t for saprolite; with US$12.00 per tonne of ore for processing. The pit slopes selected were 45° for saprolite and 55° for fresh rock. Measured densities were 1.8g/cm3 for the weathered rock and 2.6 g/cm3 for fresh rock.

The 2019 resource estimate is based on drill and trench data from nine separate deposits, several of which are contiguous. Microgranites and rhyolites host a set of Northeast (NE) and East-West (E-W) trending conjugate shear structures / veins exhibiting late brittle deformation. These were the primary structural controllers of hydrothermal alteration and associated gold mineralization and are in general higher grade. Gold and pyrite in the bedrock sulphide domain is contained within hydrothermal alteration envelopes of sericite-epidote-chlorite-quartz within and adjacent to the structures.

On October 16th, 2019 the Company announced that it had received the first Environmental Permit (LOPM No 320459) for the Trial Mining Licenses with respect to permit 866.160/2007 for the Cajueiro project. The permit is valid for three years until October 6, 2022. Please see the News Release dated October 16, 2019 for additional details.

Subsequent to receiving approval of the Frist Environmental permit above, on January 16th, 2020 the Company announced that had received the first Trial Mining License with respect to permit 866.160/2007 for the Cajueiro Project.

Altamira is also pursuing Trial Mining Licenses over three additional claim blocks which cover the resources in the northern part of the Crente deposit as well as the Baldo, Matrincha and Marines deposits within the Cajueiro project area. 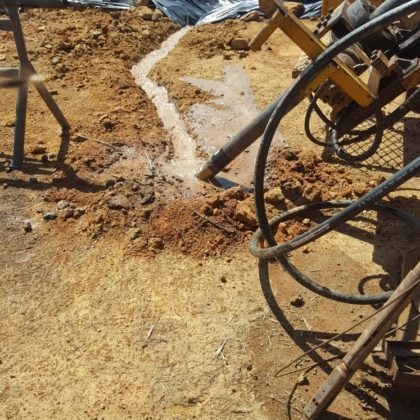