Vancouver, British Columbia–(Newsfile Corp. – November 18, 2021) – Altamira Gold Corp. (TSXV: ALTA) (FSE: T6UP) (OTC PINK: EQTRF) (“Altamira” or the “Company“) is pleased to announce the results of the first two diamond drill holes at the Mutum target within the Apiacas project area, and to provide an update on exploration at the Santa Helena project. Both projects are located within the Alta Floresta Gold Belt in Northern Mato Grosso, Brazil.

Michael Bennett, President and CEO of Altamira Gold commented “The results of the first drill holes at Mutum are encouraging and demonstrate that primary gold mineralization is disseminated over wide intervals within altered intrusive rocks. Although the average grade encountered in the first drill hole is subeconomic, permitting considerations meant that we were only able to commence drilling on the periphery of the target area at Mutum. The new environmental permits now doubles the area of the central portion of the Mutum target that Altamira can now drill test. At the same time in the Santa Helena Project area, we are preparing to drill test several targets for the first time with porphyry style mineralization and high grade gold and copper veins to be targeted. Diamond drilling of these targets is expected to begin during late November”. 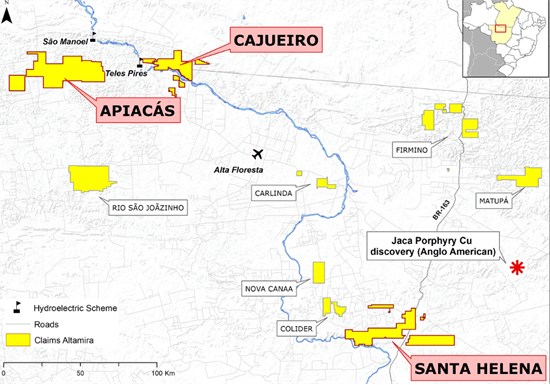 Figure 1. Regional Map showing the location of the Apiacas (drilling in progress) and Santa Helena (drilling commencing Nov 2021) projects and the Cajueiro project 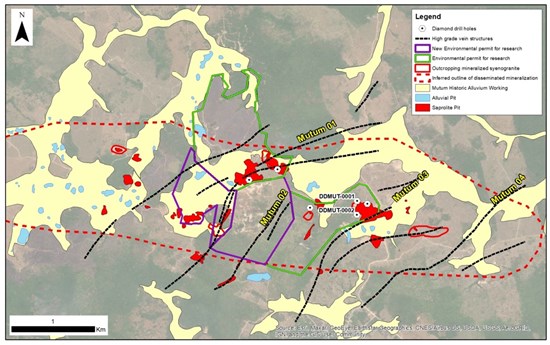 Figure 2. Location of first six diamond drill holes within the Mutum target area in the Apiacas project and the new environmental licenses where further drill testing to the west of the initial drill area will be initiated

Initial diamond drilling has been limited to the areas with active drill permits covering a 1.5 kilometer east-west corridor within the Mutum target. The first six diamond drill holes were drilled to downhole depths of between 126 m and 276 metres (see Figure 2) and targeted both chargeability anomalies and the depth extension of the surface gold mineralization indicated by both the historic artisanal mining and the channel sample results collected by Altamira (see press releases dated June 4th 2019 and June 8th 2021).

The first diamond drill hole, DDMUT-0001, returned 131.75m @ 0.15g/t gold indicating the presence of widespread disseminated gold mineralization within intrusive rocks at Mutum. The drill hole DDMUT-0001 (see Figure 3) shows a wide section of silicified and sericitized syenogranite which is foliated and displays disseminated pyrite mineralization similar to that mapped and sampled on surface. The second drill hole DDMUT-002 collared to the south of the first hole did not intersect the same silicified and sericitized syenogranite seen in the first hole but cut a two metre wide zone which assayed 0,45 g/t gold within sericitized syenogranite host rock. Drilling of the first six holes was limited to a 1.5 kilometer east-west corridor but with the extension of the environmental permit published recently drilling will be expanded a further 1.5 kilometers to the west in areas which have been historically heavily worked for gold on surface. Both disseminated pyritic and gold mineralization and north-easterly trending higher grade vein structures will be targeted in the next series of drill holes planned for this recently permitted area. Analyses from holes DDMUT-0003-6 are awaited. 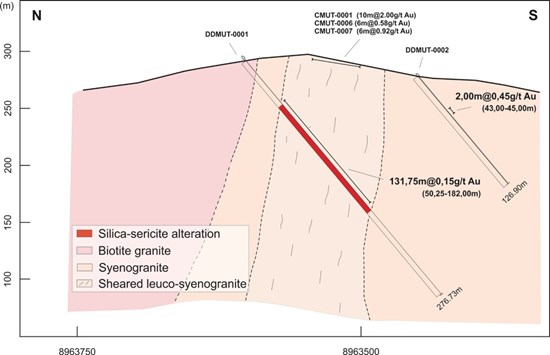 The Santa Helena project is located immediately adjacent to the paved BR-163 federal highway in the state of Mato Grosso and 60km SW of Anglo American’s Jaca porphyry copper discovery (Figure 1). Previous artisanal mining activity has focused on high-grade gold hosted in vein structures. However, mapping, soil and rock chip sampling by Altamira has identified both extensions to the known vein gold targets plus significant copper, molybdenum and gold anomalies related to areas of porphyry-style alteration in a zone which extends 7km E-W by 4 km N-S, indicating the presence of a very large hydrothermal system. 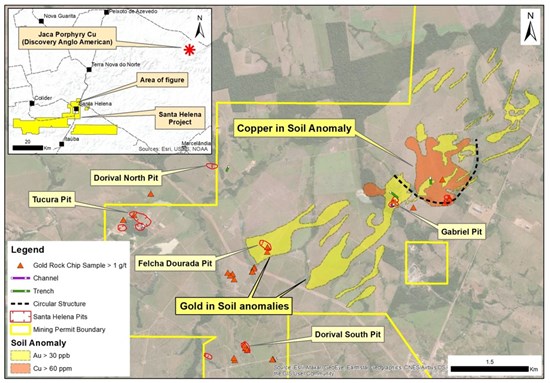 Figure 4. Main targets within the Santa Helena project. Note the widely distributed garimpo pits on high-grade gold veins. Soil sampling and trenching is in progress to define precious and base metal anomalies and to develop ranked targets for ground geophysics and/or direct drill testing

A trenching program has been initiated at the Dorival North target where visible gold and copper oxides in quartz veining have been observed and mapped from surface float and trench samples (see Figure 5).

The most easterly target, Gabriel (Figure 4), includes a small historic open pit artisanal mine which previously produced gold from a series of high-grade veins. A total of 20 rock chip samples were collected on surface from this area in 2018 and returned gold values ranging up to 171.6 g/t gold and 0.96% Cu and averaged 19.0 g/t gold and 0.11% Cu. Seven samples returned values above 10g/t gold.

Recent channel sampling in the former Gabriel garimpo pit has exposed a zone of stockwork quartz veining, 60m wide, in intrusive rocks (see Figure 6). This type of alteration is characteristic of porphyry deposits and additional trenching is in progress to assist with the siting of the initial drillholes on this target. 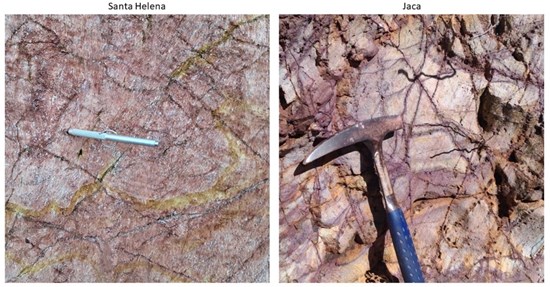 To view the source version of this press release, please visit https://www.newsfilecorp.com/release/104175