Matt Cooper, Principal at Core Geophysics and a geophysical consultant to the Company commented “Induced Polarisation Surveys provide a measurement of chargeability and resistivity of the ground. Where there are sulphide concentrations in the bedrock the chargeability will be higher. The very wide, high chargeability anomalies that we have encountered at depth on the four initial IP lines are interpreted as the sulphide bearing intrusives, vertically below the areas which have been mapped on surface with disseminated sulphide and gold mineralisation. The anomaly remains open both at depth and along strike”.

Michael Bennett, President and CEO of Altamira Gold commented “We are extremely excited by the initial results from the IP survey. The possibility of a wide sulphide -rich body underling the area mapped as a syenogranite intrusive containing disseminated pyrite and gold mineralisation on surface, is a really positive indication for the presence of deeper-seated mineralisation and demonstrates that this work will be invaluable in assisting the company in siting the initial drillholes”.

Ground based IP survey is now 50% complete over the Mutum target, within the Apiacas Gold project. The survey has been partially completed over the central and western zones of the target area, Figure 1. The survey was commissioned to detect disseminated sulphide concentrations which are related to gold mineralisation within the syenogranite intrusive. 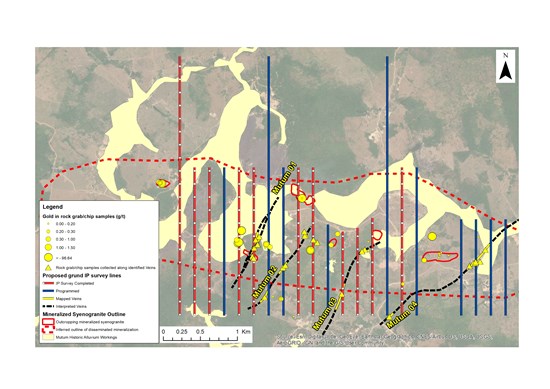 The survey has been planned on 200m spaced lines to cover the most prospective portions of the project at 2 km lengths, with some lines extended to 3 km to test the width of the mineralised syenogranite intrusive body (Figure 1).

Inversion of the data has displayed regions of high chargeability evident across numerous lines within the mineralised syenogranite intrusive body (Figure 2). These anomalies are interpreted to represent accumulations of disseminated sulphides at depth, potentially associated with gold mineralisation. These zones which are some 500- 650 metres in width can now be traced for over 800 metres along east-west strike open in both directions and represent priority targets for follow up drilling. 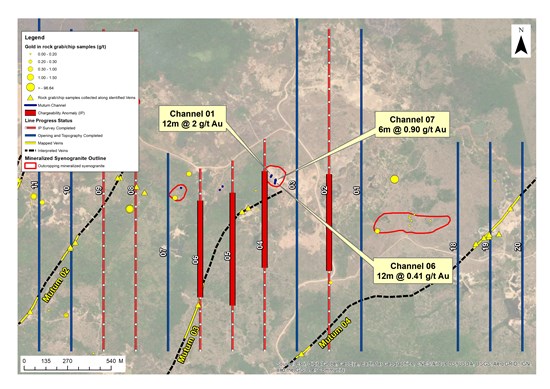 Figure 2: Map showing high chargeability anomalies on four lines in the central part of the Mutum target in the Apiacas project. The anomalies are directly below an area with mineralised syenogranite intrusive mapped and sampled on surface

The resistivity data clearly shows a marked vertical zonation with a change from lower to higher resistivity at a vertical depth of 60 metres which is interpreted as the oxide-sulphide interface within the mineralised syenogranitic intrusive body. Figure 3 shows the resistivity response on Line 2.

The high chargeability anomaly which is between 500-650 metres in width and seen below 70 metres is open at depth. Figure 4 shows the anomaly on lines 2 and 4.

To view an enhanced version of Figure 4, please visit:
https://orders.newsfilecorp.com/files/4500/86871_altami2.jpg

The IP survey is proving to be crucial to defining the limits of the altered and mineralised intrusive rock with disseminated pyrite and gold and will guide the subsequent trenching and drill program. As stated in the press release of 21st April 2021, an environmental permit has already been granted to allow drilling over part of the central Mutum area.

Further channel sampling along a new road cut parallel and close to line 4 has exposed a section of mineralised syenogranite intrusive to the north of the previously reported channel of 12 metres @ 2.0 g/t Au. The new channel samples shown in the photos below returned 0.9g/t Au over 6 metres and 0.41g/t Au over 12 metres with all three channels located on surface directly above the high chargeability anomalies identified by the IP survey in the area. 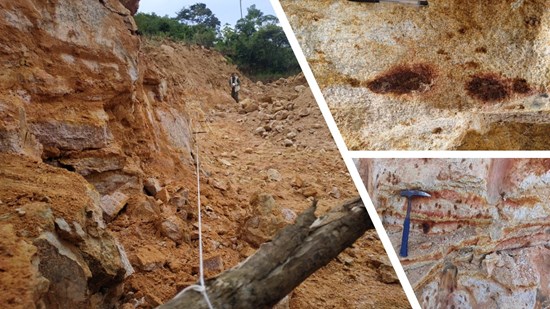 To view the source version of this press release, please visit https://www.newsfilecorp.com/release/86871